What is the Difference Between Dual-Mono and Stereo?

There are terms in mixing which are not easy to understand at first glance. For example, what do dual-mono, stereo, mono, stereo-linked, crosstalk, and stereo-interleaved all mean? Let’s take a look.

For a graphical explanation of the two, see Figures 1 and 2 a little further down the page.

This article answers a few more questions related to Mono and Stereo Setups. It takes about 10 minutes to read and the topics covered are:

A lot of the processes and practices used within modern digital mixing is a carryover or has been derived, from our analogue brethren. In the analogue world of sound processing, stereo amplifiers, for cost and miniaturisation reasons, often share components and circuitry. In stereo amplifiers that share a common ground (-ve), PSU (power supply unit), pre-amp, and even some circuit components, left and right channels are altered, or more precisely are affected, by the “sharing” of circuits.

The “sharing” process is commonly known as crosstalk - where separate signals are mixed in some way. Refer to Figure 1 (Stereo) below. The amplifier receives audio as independent left and right channels, but because of crosstalk, the sound is mixed on output. This type of design is often seen on lower budget hi-fi equipment and doesn’t concern the average listener.

Dual-mono amplification, on the other hand, completely separates the audio signals. The grounding, PSU, pre-amp, and circuits are not common. Usually, the only things shared are the power cord, the casing, and the front panel controls.

Essentially, in a dual-mono setup, these are two separate amplifiers with the same design, with matched or high manufacturing tolerance (read: more expensive) components. Figure 1 (Dual-Mono) shows that the left and right signal paths are entirely independent. In truth, the signals can be effected through RFI (radio interference of components), but the effects are negligible.

In summary, stereo amplifiers mix left and right signals to some degree because of shared components and the effect of crosstalk. Dual-mono amplifiers keep signals fully separated.

What's that got to do with Mixing in a DAW?

So, bearing in mind what we just learned from the analog amplification world, let’s look at some compression examples. Figure 2 shows:

which will help to explain what's going on.

Stereo-Linked Compressors have one set of controls (threshold, attack, release, make-up gain) and the compressor affects both signals equally. For example, if a crash cymbal from the drum overhead in the right-hand channel causes the compressor to react and push the track volume down by 3 dB, the same 3 dB will be reduced equally on both sides.

For many productions, this behaviour is perfect. Without the stereo-linking, the stereo image will dance right-to-left and left-to-right with every compressor reaction. The result is a shifting stereo image - not cool!

Dual-Mono A has one set of controls, and the compressor affects both signals independently. So whatever threshold, attack, release, and make-up gain is set for the left is also set for the right. But in this case, the left channel is processed differently to the right channel. Imagine having two identical compressors, with identical settings, on two separate tracks.

The keywords to remember here are 'shared' and 'independent'.

Stereo-Linked Compression on the Mix Bus

Hopefully, you can see the advantage of mixing with a stereo-linked compressor. And this setup is probably most advantageous when setup correctly on the stereo 2-bus.

What is a two bus?

To make mixes sound more like a record, a mixing engineer relies on 2 to 3 dB of gain reduction on the 2-bus. To “glue” a track, it is vital to raise the volume of quieter parts of the music and lower the amount of louder parts. This is exactly where a stereo-linked compressor can work wonders. This setup will keep your stereo image intact.

What is the difference between mono and dual-mono? Mono is one single track. In mixing, a mono track can be panned hard right or hard left and anywhere in between. Dual-mono is two individual tracks that are usually panned left and right. They would typically have a shared sound source (for example drum overheads) and could be placed on a stereo track inside a DAW.

It would be unusual to have a dual-mono track setup where there is no commonality of instruments. For example, you wouldn’t expect to see a DI recorded bass line and the main vocal sharing the same dual-mono (stereo) track.

As Dr Spock would undoubtedly point out "it would not be logical to put these single mono tracks together Captain".

What is the difference between mono and stereo? The difference between the two is simply the number of channels. Mono, from the Greek word ‘monos’ meaning ‘alone’ is one channel. Stereo, from the Greek word ‘stereós’ meaning ‘solid’, is two channels. Interestingly, the term ‘stereo’ derives from sounds which are 3-dimensional (solid, and therefore having width and depth).

Stereo in this respect is not purely "two" sound sources - it infers a solid wall of sound with depth and breadth. For more information, check out the Wikipedia entry for 'Wall of Sound' or 'Spector Sound' - it's quite interesting how early pioneers thought about the transition from mono to stereo productions.

How do you make a mono track stereo? Well, technically, you can’t. If a track was recorded in mono, it would always be a mono track. However, it is possible to create stereo effects from a mono track. There are several ways to do this. These include:

I wrote about adding stereo delay in another article here but if you just want to hear the effect, listen to these two files:

The stereo delay effect is intentionally 'overcooked' to hear the impact without difficulty.

The key to this trick is to copy the original source onto two tracks, pan them left and right, and ensure that they are processed differently.

What is an Interleaved Stereo File? In interleaved stereo file is a file that contains audio information for the left channel and right channel. The bytes (packages) of data are ordered left-right-left-right et cetera; hence the term ‘interleaved’ or ‘embedded’.

That concludes our discussion on the different types of mono and stereo setups. The article covers the most common aspects related to recording, mixing, mastering, and creating final-use audio files. I hope that you found the information helpful. 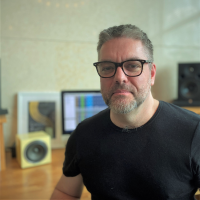 Back in 2009, I bought myself a copy of Pro Tools and recorded some home made music. It was challenging to start with, as I had no idea what I was doing. I made many mistakes on my journey - some fun, some expensive, and many time-consuming! I find running a Home Music Studio a fascinating and rewarding hobby and still enjoy it every day. This website is where I’d like to share everything that I’ve learned.

This site is owned and operated by Tim Williams. WilliamsSoundStudio.com is a participant in the Amazon Services LLC Associates Program, an affiliate advertising program designed to provide a means for sites to earn advertising fees by advertising and linking to Amazon.com. This site also participates in other affiliate programs and is compensated for referring traffic and business to these companies.
Copyright © 2011 ‐ 2022   williamssoundstudio   All rights reserved.